How to be a Dictator : The Bainimarama Dictatorship in Fiji

A dictator is a job for life. If you retire you will face certain trial for the crime of treason and other related offences


This E-book is about the Bainimarama dictatorship in Fiji. It is a brief attempt to describe and understand it along a number of features consistent with;

A dictatorship is one of the most harmful types of governments, as it leaves the power in the hands of a very few number of people, who use that power for their own personal motives.

They often seize power illegally using force and weapons. More often, it is the military that carry out the illegal takeover of power from elected governments by virtue of their possession of weapons and personnel under various pretexts.

This was certainly the case in Fiji on December 5th 2006, when the military under its commander, Frank Bainimarama, removed the government of Prime Minister Laisenia Qarase in a coup. Since then, Fiji and its people have been ruled by a military dictatorship.

To remain in power, force has been widely used to suppress and curtail personal freedom and the rights of citizens. Physical abuse, torture and deaths have resulted in a number of cases. Significant changes have been carried out in the institutions of government and public service. The rule of law has been eroded and citizens face ongoing restrictions in how they live their lives. It is far cry from the aspirations of Fiji’s population to live and be governed by a government of their choice and where the rule of law applies to all.

When dictatorship is a fact, revolution becomes a right.
Victor Hugo

Bainimarama and his supporters are now attempting to introduce a new constitution that strengthens their position and ability to continue to intervene in the future political affairs of Fiji. A new electoral system is to be developed and to endear themselves to the people, generous social welfare spending and an extensive capital works programme are underway. This has largely been funded with loans from overseas countries further adding to the level of indebtedness.


Anywhere, anytime ordinary people are given the chance to choose, the choice is the same: freedom, not tyranny; democracy, not dictatorship; the rule of law, not the rule of the secret police.
Tony Blair
In foreign relations, suspension of membership from longstanding associations has necessitated the establishment of new alliances. Relations have been established with nontraditional and far-flung nations, some with unsavoury reputation such as North Korea and Cuba, while China and India have been heavily courted for funding and aid assistance.


No government or civilization will last forever. When the people realise you are the cause of their misery and hardship, you don’t have much longer.

Read about it all in this E-Book!

"Doing business in China has been for me, always frustrating, generally unprofitable but curiously enjoyable.  Part of this has been the warmth of the Chinese people, but I suspect most of it is due to my own sense of humour, which has been my weapon against low spirits in times of adversity. 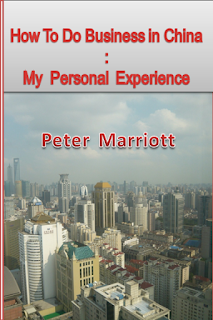 But the fact remains that China will be the most important economy in the 21st century.  Perhaps it will not be the largest (although that seems likely) but it will be the economy that will determine business futures in so many areas.  Once that proposition is accepted, it is almost inevitable that business in China ought to be considered.  But it will represent a challenge.

The starting point of any business challenge is to understand what you are getting yourself into.  But this is a “How to” guide, so once that background on China and the Chinese is delivered my intention is to give some pointers on how to do business there or with them.

This text is based on my personal experience rather than research or the collected stories of others.  Some of the lessons that I have taken on board have been hard learned, at personal cost – always the most indelible rote. "
by Peter Marriott

GET YOUR COPY OF THE BOOK TO FIND OUT MORE ON
"HOW TO DO BUSINESS IN CHINA"!